I've got an Apexi Power FC in my '96 RX7 and i love it! ... but the commander is a pain to use and there's no data logging!
I want to be able to see whole maps not just a little corner of a map.
I want to be able to save and upload maps in one hit rather than going in and out of those menus. My thumb hurts!
I want to be able to log all the sensors on my engine and I want to set my fans to come on at 85 degrees instead of 100.
Is that all too much to ask?

I know Apexi have the software to do all this so I asked them if I could buy a copy... The short answer was NO!
The long answer is they lease the software to Apexi Exel dealers in Japan. If everyone had it the dealers would stop paying... Which is all very well in Japan but I'm in New Zealand! I brought the car in Japan but I don't want to ship it back for a tune up...

Now I'm no genius but I know one when I meet one!
We will call him "Mr. X" for the time being...
Mr. X has an FD (gen 3 FD3S RX7) with a Power FC. His hobbies are drag racing and number crunching.
"Mr. X" decided he needed data logging if he was going to get his "stock" FD to do any better than his best 12.2 1/4 mile time.
So Mr. X built the "FC-Box" interface, wrote a lot of software software, "FC-Edit" and, with a combination of logging runs and fine tuning his FD and optimizing his driving style he got his best 1/4 down to an 11.6.

Well, it wasn't quite that simple and it took a lot of development time too, but it can be easy for you because "Mr. X" and I have put the whole system into one easy to use package we call "FC-Datalogit".

*Note that we are continuously working on "FC-Datalogit" for other types of cars that use Power FC.
Click the link to see what models are available now: 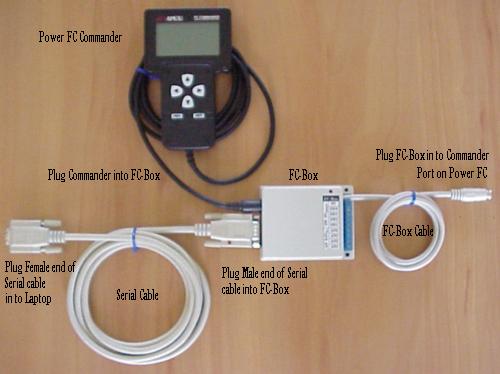 "FC-Datalogit" Hardware. (Commander sold separately)
Commander is not required but will work if you have one and want to use it

Here's how you use "FC-Datalogit";
* note specifications are subject to change due to our continuos improvement programme.


If you have USB ports on your laptop you will need to purchase an approved/supported Serial-USB converter from your "FC-Datalogit" dealer.

* The "FC-Box" has terminals where you can plug up to four addition inputs. 0~5v.
You can use an input to plug a wide band o2 sensor controller into the "FC-Box" and log the output or use two inputs if you want to have a wide band o2 with earth compensation.

Use it.
Basic Logging.
"File". "Monitor".
Push the "Start" button in the monitor window.
Go for a drive...
When you have logged the appropriate run, push "stop" and "save", give the file a name.
You can review your logged data or live streaming data on the embedded strip chart software.
You can also add watches to display individual or logged streams of data. 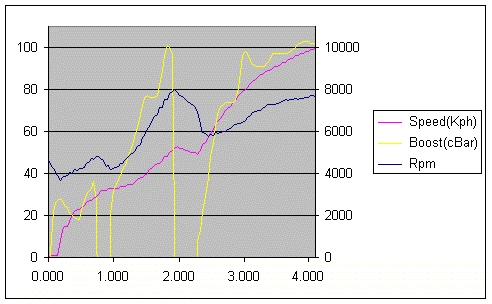 Here's a graph of Mr. X doing 0-100 KM/h in 4.1 seconds.
This chart is not from the embedded chart software in "FC-Datalogit",
You would need "FC-Edit" to view that so we just plotted the raw data on a graph using Microsoft Excel.